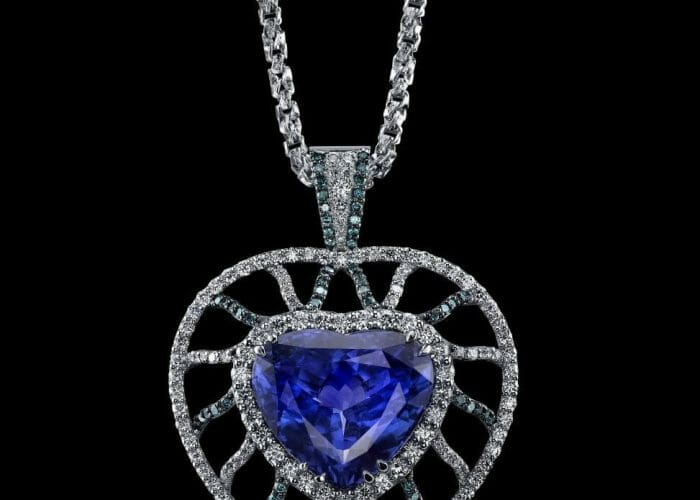 Tanzanite is the blue to violet to purple variety of the mineral zoisite. It is mined commercially only in one area of the world: the Merelani Hills of Tanzania, which is where it gets its name.

Tanzanite is relatively new to the colored stone galaxy. As the most common story of the tanzanite mining boom goes, in 1967 a Masai tribesman stumbled upon a cluster of highly transparent, intense blue crystals weathering out of the earth in Merelani, an area of northern Tanzania. He alerted a local fortune hunter named Manuel d’Souza, who quickly registered four mining claims.

D’Souza hoped that he’d been shown a new sapphire deposit. Instead, the deposit contained one of the newest of the world’s gems.

Within a short time, 90 more claims appeared in the same 20-square-mile area. No one was quite sure what the beautiful crystals were, but everyone wanted to lay claim to the profits they were certain to produce. The new gem would eventually be known as tanzanite, and it would, at times, rival the Big 3 in popularity.

Tiffany & Company recognized its potential as an international seller and made a deal to become its main distributor. Tiffany named the gem after the country it came from, and promoted it with a big publicity campaign in 1968. Almost overnight, tanzanite was popular with leading jewelry designers and other gem professionals, as well as with customers who had an eye for beautiful and unusual gems.

The instant popularity of this transparent blue to violet to purple gem was tied to its vivid color, high clarity, and potential for large cut stones.

Turquoise is found in only a few places on earth: dry and barren regions where acidic, copper-rich groundwater seeps downward and reacts with minerals that contain phosphorus and aluminum. The result of this sedimentary process is a porous, semitranslucent to opaque compound of hydrated copper and aluminum phosphate.
Turquoise is a prime example of an opaque colored stone that can be marketed both as a gem for jewelry and as an ornamental material.

Turquoise might lack the sparkle and clarity of transparent colored gemstones like ruby, emerald, and sapphire, but its multi-layered history and soul-satisfying color make it a desirable gem. Its color can range from dull greens to grass greens to a bright, medium-toned, sky blue. People value turquoise highly for its combination of ancient heritage and unforgettable color.

Turquoise is one of the world’s most ancient gems. Archaeological excavations revealed that the rulers of ancient Egypt adorned themselves with turquoise jewelry, and Chinese artisans were carving it more than 3,000 years ago. Turquoise is the national gem of Tibet, and has long been considered a stone that guarantees health, good fortune, and protection from evil.

The gem’s name comes from the French expression pierre tourques, or “Turkish stone.” The name, which originated in the thirteenth century, reflects the fact that the material probably first arrived in Europe from Turkish sources.

Turquoise was a ceremonial gem and a medium of exchange for Native American tribes in the southwestern US. They also used it in their jewelry and amulets. The Apaches believed that turquoise attached to a bow or firearm increased a hunter’s or warrior’s accuracy.

Turquoise is plentiful and available in a wide range of sizes. It’s used for beads, cabochons, carvings, and inlays. Although well known to consumers, its popularity in the mainstream jewelry industry comes and goes. The biggest and most permanent market is in the American Southwest. It’s also popular elsewhere, among customers who are captivated by that region’s mystery and romance, as well as by the blue of its skies.