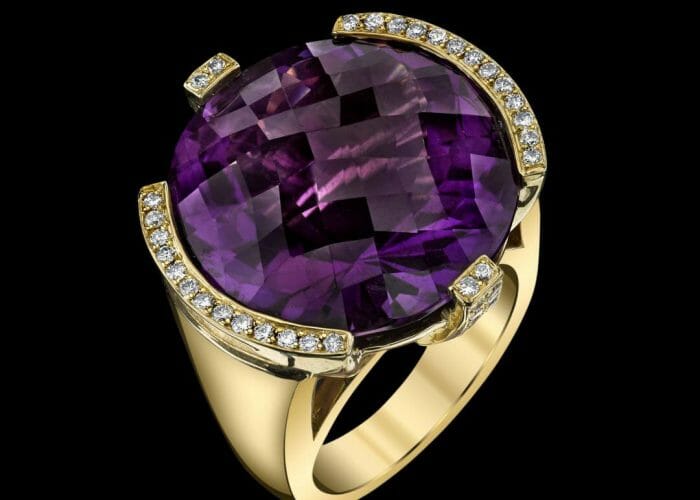 The February birthstone, amethyst has many popular symbolic and folkloric associations both ancient and modern, from love and spirituality to supernatural protection. Read on to learn more about amethyst symbolism and legends and find some inspiration for your own jewelry pieces.

The Story of Bacchus and Amethyst

One of the most well-known of those protections involves amethyst’s purported power to prevent drunkenness. A myth about Bacchus, the Roman god of wine, has promoted this belief. The story goes as follows:

Long ago, a beautiful maiden was on her way to worship at the Temple of Diana. However, she had the misfortune of crossing paths with the god of wine, Bacchus. Angered since he’d just suffered some slight, he’d vowed to take revenge on the next person he met. He spied the maid and unleashed his two guardian tigers upon her. As the great beasts bounded towards the hapless lass, the goddess Diana intervened. To spare her such a terrible fate, she turned her into a pure, clear stone.

Immediately, remorse seized Bacchus. To atone for his actions, he poured his wine over the stone, staining the crystal a deep, violet hue. And so, the maiden Amethyst lent her name to the crystal.

Although presented in a Classical guise, this myth only dates from the Renaissance. The French poet Remy Belleau created this story in 1576 as part of a poem on gemstone beliefs. Nevertheless, the idea that the stone could guard against drunkenness does go back to the Ancient Greeks. Amethystos means “not drunk” in Ancient Greek. They believed you could drink all night and remain sober if you had an amethyst in your mouth or on your person.

Perhaps this association with calming physical passions led some early Christians to associate the amethyst with Christ. The gem’s purple colors represented purity of spirit. Its purplish and reddish hues represented the chastening and purifying effects of suffering. Some believed the colors alluded to the wounds and suffering of Christ. Thus, amethysts were used to aid the healing of wounds.

Many cultures find spiritual overtones in amethysts. Often viewed as a stone of peace, some believe amethyst’s calming presence produces soothing dreams by bringing the dreamer more in tune with the Divine. This clarity and peacefulness also extends to the waking mind. Amethysts are said to help the mind flow freely in both mental and metaphysical dimensions. Many psychics keep this gem with their tarot cards or other oracular instruments.

The Ancient Egyptians worked amethysts into amulets as both a form of prayer and protection against harm. While later Egyptian artisans created elaborate and breathtaking pieces, early jewelry makers kept their designs more practical. At first, carnelian and beryl gems as well as amethysts were carved into the shapes of animals. Most likely, early magicians designed these devices as protective fetishes. In later times, an organized priesthood produced these amulets.

People have valued and worked amethysts for millennia. An ages-old cure for an ages-old affliction, rubbing a moistened amethyst on pimples is said to cure them. 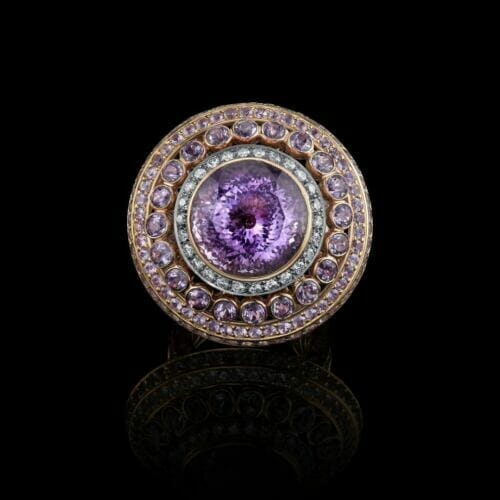 Amethyst symbolism is a busy field. Ruled by the planet Jupiter, it’s the zodiacal gem for those born under the sign of Pisces. Both traditional and modern birthstone lists include amethyst as the February birthstone.

On the subject of February, according to legend, St. Valentine wore an amethyst ring carved with Cupid’s likeness. This may seem an unlikely pairing, given the gem’s reputation for calming passions. However, keep in mind that in Medieval times, chaste love was highly valued as true love. Amethysts signified this vision of love.

Since we started with a poetic tale, let’s part with a poem on amethyst, author unknown:

From passion and from care kept free

Shall Pisces’ children ever be

Who wear so all the world may see

More about the stone

Amethyst is crystalline quartz in colors ranging from pale lilac to deep reddish purple. With a relatively high hardness of 7, the February birthstone is a fine facetable jewelry gem for all purposes. Lower grades of material can be cabbed, carved, and made into a great variety of beads and other ornamental objects.

People have prized amethysts for thousands of years. The Ancient Egyptians carved these durable gemstones into the shapes of animals, perhaps as protective amulets. The Ancient Greeks created amethyst carvings and jewelry pieces as well as one of the most enduring bits of amethyst folklore — its supposed power to prevent drunkenness.

Amethysts can serve as beautiful centerpieces as well as accent or side stones in jewelry.

Amethysts may appear similar to other popular transparent gemstones such as sapphires, spinels, and rhodolite garnets. However, since these gems occur rarely in purple colors, you’re more likely to encounter amethysts misidentified as these rarer and more expensive stones. Nevertheless, these gems have notable differences in both optical and physical properties. Sapphires, spinels, and rhodolites all have higher refractive indices (RI), and spinels and rhodolites are also isometric. They also all have greater specific gravity values.

Natural amethyst receives its color from the presence of iron and other trace elements as well as natural irradiation. Amethysts may show color zoning, both uneven (unintentional) color distribution as well as color bands (intentional).

What’s the Difference Between Amethyst and Ametrine?

Ametrine is a variety of quartz with two distinct color zones, purple and yellow. These layers result from stop-and-start growth during the formation of the crystal underground, a process known as twinning. Since purple quartz is amethyst and yellow quartz is citrine, this means such a gem consists of amethyst and citrine zones, hence the name.

Usually, faceters will cut ametrines into rectangular emerald-cut shapes to highlight the two colors. However, some gem cutters may opt for designs that combine the zones, creating interesting flashes of color.

What’s the Difference Between Amethyst and Ametrine?

Ametrine is a variety of quartz with two distinct color zones, purple and yellow. These layers result from stop-and-start growth during the formation of the crystal underground, a process known as twinning. Since purple quartz is amethyst and yellow quartz is citrine, this means such a gem consists of amethyst and citrine zones, hence the name.

Usually, faceters will cut ametrines into rectangular emerald-cut shapes to highlight the two colors. However, some gem cutters may opt for designs that combine the zones, creating interesting flashes of color.

Although quartz gems are very durable, amethysts are sensitive to extreme heat. Furthermore, inclusions can make these gems susceptible to shattering in ultrasonic cleaners. Avoid mechanical cleaning systems and stick to a soft brush, mild detergent, and warm water, instead.