Garnet: Beauty in Many Colors 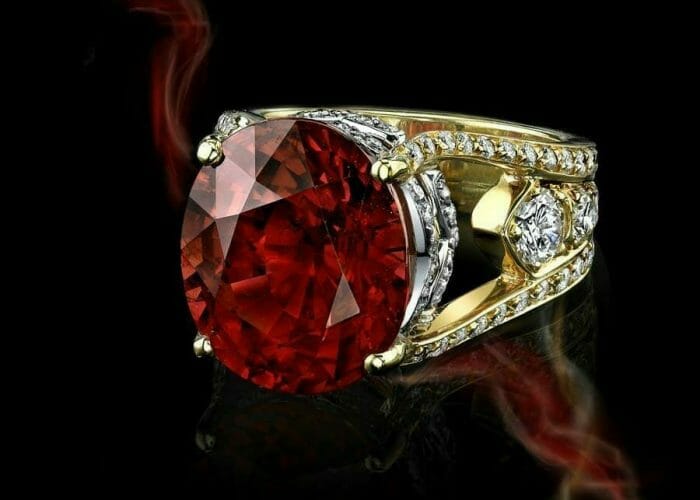 Although garnet is commonly associated with the color red, these gemstones can be found in almost any color and are popular choices for jewelry of all types. That’s excellent news if you’re in the market for this January birthstone. The garnet family is one of the most complex in the gem world. It’s not a single species but rather consists of several species and varieties. This gem listing will focus on qualities common to all garnets and offer a brief overview of their diversity.

Unlike minerals such as beryl or corundum that are a single species with colored varieties created by trace elements, garnets come in different species and are never found in their pure state. They are always mixed with other garnet species. Garnets are called a solid-state series or a blend. Some of these blends have distinct features and are recognized as varieties of garnets in themselves. What makes them all garnets is the same crystal structure and similar properties.

For more information on these species and their own varieties, click on the links to the individual listings.

The most common gemstone in the garnet family, almandines come in a wide range of colors. The blend of almandine-pyrope is the dark red variety popularly associated with garnets.

One of the rarest garnets, andradites have the highest dispersion of all garnets, with even more fire than diamond. Demantoids, a variety of andradite, are especially prized.

Unlike other garnets, grossulars are rarely red or dark in tone. However, they do occur in every color, even colorless, except blue. Their light to medium tones and vibrant colors make them excellent jewelry stones. Tsavorites have an emerald-like green color and can command high prices, while hessonite “cinnamon stones” are popular and inexpensive.

Never transparent, hydrogrossulars are commonly blueish green in color but are sometimes found in pink, white, and gray. (Editor’s note: the classification of hydrogrossular as a garnet species is debatable).

Chrome pyropes show a red that can rival rubies. However, these stones have a very dark tone.

The rarest member of the garnet family, uvarovites have a dark, rich green that rivals emerald. Facetable material is even rarer and always small.

The following blends are considered to be varieties of garnet and not sub-varieties of the above species.

Rhodolites are a blend of pyrope and almandine with a distinctive purplish color.

This term was originally used to describe garnets that didn’t fit into standard categories. Now, gemologists recognize malaya or malaia garnets as a blend of pyrope and spessartite.

In recent decades, color change garnets have been discovered that turn blue in artificial light. In the late 1990s, blue garnets that are red with purple flashes under incandescent light were discovered in Madagascar. These color change stones are a pyrope-spessartite blend. Some Idaho garnets show a strong color shift from red to purplish red. These are an almandine-pyrope mix.

The following species are known to blend:

Garnets share common properties at the molecular level despite considerable variations. For those not scientifically inclined, here’s a visualization that, while not scientifically rigorous, may help illustrate this. If your hand were a model of a garnet molecule, all garnets would share the arrangement of atoms represented by the palm. However, the atoms represented by your fingers are interchangeable. In other words, different atoms can reside on your fingers, while the palm remains the same. Anytime you change the chemistry, you have a different species. Change the atoms of a finger and you have a different species, even though the structure and related properties remain the same (or very nearly so).

Of course, the chemistry of garnets varies far more than the hand model can accurately demonstrate. Below is the chemical composition of the gem garnet species.

As you can see, there are several variations in chemistry.  Nevertheless, they all maintain the same basic structure. Garnets crystallize in the isometric system. Their most common forms are the trapezohedron and dodecahedron. Curiously, they rarely appear as cubes or octahedrons, the most common shapes of other isometric minerals. Garnets may also be massive, granular, and in tumbled pebbles.

For decades, gemologists have described rhodolite as one part almandine and two parts pyrope. However, garnets are not that simple. Rhodolite gems, as well as all other garnets, have some of the other species in the mix as well. These may be present in very small amounts, but garnets are never as simple as just two ingredients. Furthermore, a solid-state series like an almandine-pyrope blend doesn’t mean that it’s a mix of two kinds of molecules, Fe3Al2Si3O12 and Mg3Al2Si3O12. Instead, it means that the structure contains both Fe and Mg.

Due to garnet’s tremendous range of overlapping colors, gemologists can’t identify this gem on the basis of color alone.  This information is for reference only.