5 Things to Know About Red Beryl 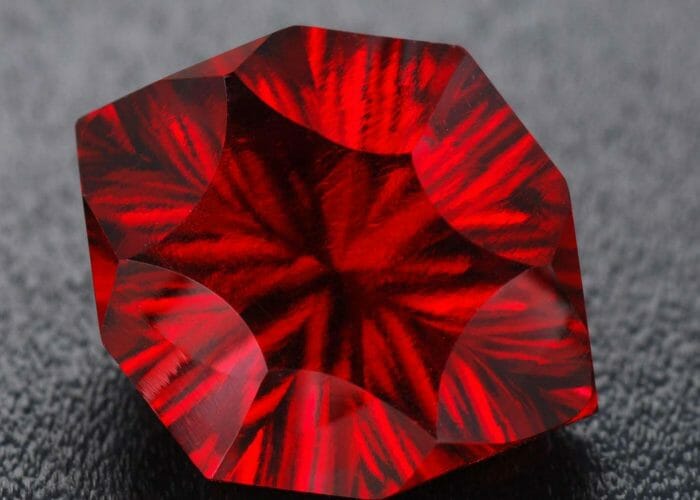 You all know the saturated blueish-green to green variety of beryl well—it’s emerald, of course.

You definitely also know the green-blue to blue beryl we call aquamarine and, most likely, its pink to orange-pink cousin, morganite.

But what about the red variety of the mineral? It’s a rare one so it doesn’t have a lot of exposure, but gem connoisseurs love it.

Red beryl is a one-source gemstone that is extremely rare.

The Utah Geological Survey estimates that for every 150,000 gem-quality diamonds unearthed, one crystal of red beryl is found.

The gemstone gets its rich color from trace amounts of manganese and is a 7.5-8 on the Mohs hardness scale.

Red beryl is also known as bixbite after its discoverer, mineralogist Maynard Bixby, but that label has been discredited by various gem experts and trade associations, like CIBJO, because it’s easily confused with another mineral named after the same man—bixbyite.

Here are five things to know about this gorgeous red gemstone. 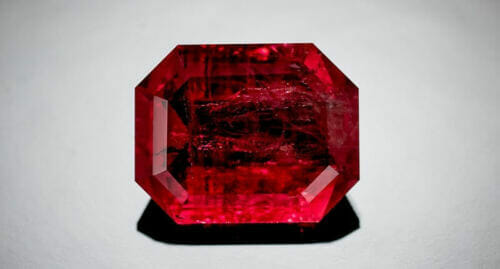 1. Gem-quality material comes from only one place.

Bixby found this member of the beryl family more than a century ago, in 1904, at his claim in the Thomas Range in Utah.

According to the Gemmological Association of Great Britain, after Bixby’s early discovery, prospector Lamar Hodges found a second deposit of red beryl at what came to be known as the “Ruby Violet” mine in the Wah Wah Mountains of Utah.

Wah Wah is the only locality in the world known to have produced gem-quality red beryl. According to an article from the Gemological Institute of America, as of 2003 only about 60,000 carats had been mined.

Red beryl has been found at a few other locations in the United States as well as Mexico, but at these locations, the crystals are generally too small, short or imperfect to facet.

Currently, there is no commercial production of gem-quality red beryl, according to several sources.

2. Not surprisingly, big sizes and fine quality stones are hard to find.

This can be said for many colored gemstones, especially when you reach the higher-quality tiers.

But according to specialists, a 2-carat red beryl is considered as rare as a 40-carat diamond, and the largest known faceted red beryl is 8 carats.

Resource website Geology.com says the largest red beryl crystals found at the Ruby Violet claim are about 2 cm wide and 5 cm long but added that most gem-quality crystals are under 1 cm long and most faceted beryl stones are 0.25 carats or less.

The average size is around 0.08 carats, Monte Zajicek said. A 0.40-carat stone is large, and 1 carat is “exceptional,” he added… Most gemstones are 1 to 4 mm and “anything larger is a treat.”

In addition to being small, there’s a good amount of red beryl production not of gem quality.

According to GIA, only about 10 percent of the goods coming from Wah Wah were of a quality that could be faceted, while gemstone and mineral seller Hunter estimated the amount of gem-quality material is below 5 percent, even with taking into account stones that have been clarity-enhanced to become gem quality.

All of this is to say: Red beryl is the rarest of the beryl family and one of the rarest gemstones overall.

Luckily, most pieces of red beryl from the Ruby Violet area have a rich, saturated red hue, providing a great pop of color even when it’s only melee.

3. There’s always a market for red beryl, faceted or otherwise.

High demand for red beryl stems from several factors, the first being its rarity.

According to Zajicek, the gemstone is also benefiting from a demand for American-mined goods. But, he also noted, most demand for red beryl is coming from Japan, with a growing demand from Asian countries overall.

Added demand has increased “a decent amount” over the last four to six years as old collections recirculate on the market.

“As the public becomes more aware of this mineral, the need to have a piece in their collection goes through the roof,” He, too, noted a rising demand from the Asian market interested in the gemstone’s intense red color but added that some U.S. collectors—especially those from Utah—“are doing their best to keep some of it here … as they feel an extra attraction to the stone for being from their home state.”

There’s also a strong demand from mineral collectors, attracted not only to the color but also the hexagonal crystal shape of a well-formed rough red beryl.

Red beryl is rare and beautiful, and its prices can really show it.

Color-matched melee with a strong red hue can sell for more than $1,000 per carat, Geology.com reported, while “nice” gems weighing more than 1 carat—very rare, as noted before—cost several thousand dollars per carat. 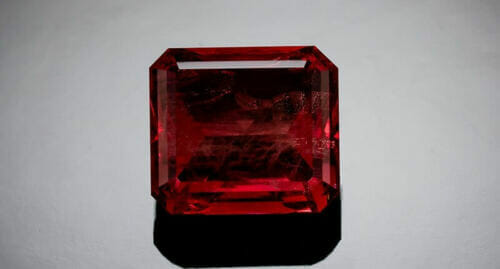 5. There are some who prefer another name for this gemstone.

Besides red beryl and bixbite, there’s a third name for the material that’s preferred by some: red emerald.

Those against the use of the term argue that “emerald” refers to saturated green beryl only and worry it deceives consumers. In its article about red beryl, Gem-A said the term should be “decried” by gemologists, and Geology.com called it a misnomer.

Some companies are in support of calling it red emerald for a few very specific reasons, with the first being that red beryl has more in common with emeralds than it does with other gem beryl varieties.

Additionally, unlike the lighter-colored beryl, emeralds and red beryl routinely have surface-reaching fissures, which affect color by altering the path of light through the stone but also provide places for grease or water to hide and can mean a risk for damage.

In a 1999 article that appeared in Professional Jeweller, gem expert Mary Johnson listed other similarities between red beryl and emeralds, including formation similarities, color zoning patterns, faceting considerations and more, such that “a color-blind gemologist … would not be able to easily tell the two varieties apart without a spectroscope.”

She argued that ultimately, “there is really only one name that associates the gemstone to its mineralogical family, beryl, and quickly and accurately communicates its rarity as well as its color: red emerald.

“This is the one name that makes it clear the red variety has comparable rarity—actually, even greater rarity—and comparable, or higher value, as has been demonstrated at recent top-tier gem and mineral shows.”

In the most recent update to its Jewelry Guides in 2018, the Federal Trade Commission added a section about gemstone varietal names and sought comment from experts before finalizing.

The American Gem Trade Association submitted a letter to the FTC, noting that while it agrees with avoiding deception through misidentification of gem varietals, it found the use of “red beryl/emerald” or “red emerald/beryl” in presenting or selling was not deceptive for many of the same reasons outlined above, provided a full explanation be included as well.

Ultimately, the final draft of the Jewelry Guides advises marketers “not to use incorrect varietal names,” giving examples like using “yellow emerald” to describe heliodor or “green amethyst” for prasiolite.

Though the guides don’t mention “red emerald” directly, the Jewelers Vigilance Committee suggests companies selling the product not use the phrase.