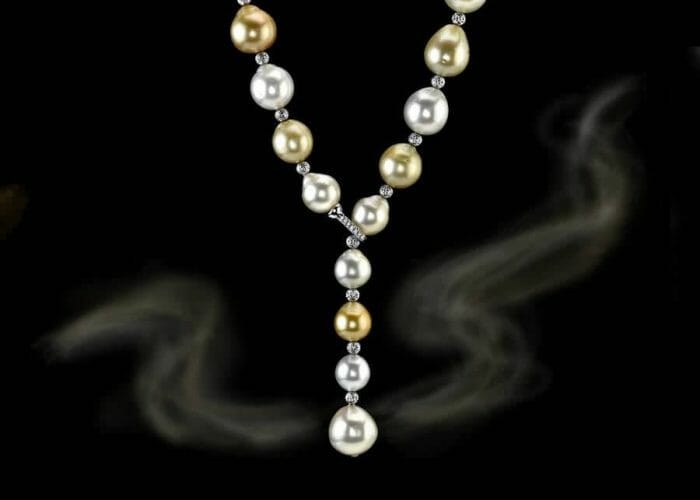 Suddenly, they are the most trendy engagement ring centerpiece around.

There is a reason engagement rings and diamonds are synonymous. With a chart-topping score of 10 on the Mohs scale — which ranks the relative ability of one mineral to scratch another — diamonds are durable enough to wear all day, every day.

Pearls, however, rank at just 2.5 on that scale. The organic gems are easily scratched and notoriously delicate.

“Pearl can be damaged by many chemicals and all acids,” the Gemological Institute of America warns in its pearl care and cleaning guide. “The list includes hair spray, perfume, cosmetics and even perspiration.”

So what does it say about the current era that pearl engagement rings are suddenly a thing?

And in early January, the four-time Oscar nominee Michelle Williams — recently engaged to Thomas Kail, the “Hamilton” director — was spotted in London wearing what was widely reported to be a pearl on her ring finger. (Her publicist would not comment.)

“We do see interest in pearls as engagement rings, part and parcel of a voracious appetite for pearls right now, I wonder if reimagining the pearl, which was co-opted for so long as very staid and traditional, is making them more modern and low-key and less fussy, and if that has any overlap with people’s desires to treat everything related to weddings the same way.”, a dealer commented.

In other words: These are not your grandmother’s rings.

“If you have a pearl engagement ring, presumably you’re taking it off periodically. Maybe that’s a fresh way to think about engagement rings? We see people being looser and more flexible.”

The diamond industry, however, is not in a panic. Diamonds still rule the engagement ring purchase — accounting for 83 percent of center stones, according to The Knot’s 2019 Jewelry and Engagement Study — even as the market for alternate bridal stones continues to grow, in step with all the other tradition-busting choices that mark modern nuptials (think multiple outfits rather than just one white gown, food trucks instead of three-course meals, and venues such as breweries and campgrounds in place of hotel ballrooms).

“When we think of alternative engagement rings, what we’re actually saying is that couples are prioritizing personalization across the entire experience, not just the wedding day,” said Kristen Maxwell Cooper, editor in chief of The Knot. “As more couples are discussing the engagement ring before the proposal happens, they’re both weighing in on what they want. Even if it’s a more delicate stone, like a pearl, they are choosing it because it speaks to them, versus saying, ‘I need a diamond solitaire.’”

Few people familiar with the current popularity of pearls would be surprised that they are being used in rings meant to endure. After all, fashion is utterly besotted with them.

Most people are equally familiar with the pearl’s other longstanding reputation: a matronly accessory, devoid of edge. And yet that very image is what charms some recent pearl fans.

“The thing that makes pearls cool is the grandma element,” said a Los Angeles jewelry designer. “I like all of those old things — like my name — that come back around.”

And therein lies the irony: When it comes to jewelry, there is nothing more classic than a pearl. Considered the world’s oldest gems because they emerge from their shells as finished products, requiring no cutting or shaping, the baubles have been sought after since the Middle Ages, as much for their beauty as for their mystical properties.

“They’re so commonly associated with purity, chastity and innocence,” said Beth Wees, a curator at the Metropolitan Museum of Art who worked on its 2018 exhibition “Jewelry: The Body Transformed.”

It light of such associations, it is easy to understand why pearls have long been used to accessorize the wedding party. From a modest pair of cultured freshwater pearl studs for the bride to a luxe strand of cultured South Sea pearls for her mother, the gems today possess a singular reputation for being both democratic and elitist.

Perhaps the evolution of pearls into bridal rings — less durable than diamonds, sure, but also orders of magnitude less expensive — was inevitable?

There are many reasons to believe in a pearl engagement ring, the pearl goes from day to night, from the soccer field to the ballroom. It is not blingy, yet fine pearls with wonderful luster do have properties we associate with gems. And pearls are the most sustainable gem on planet Earth: The cleaner the water and the better the ecosystem, the better it is for the cultivation of pearls.