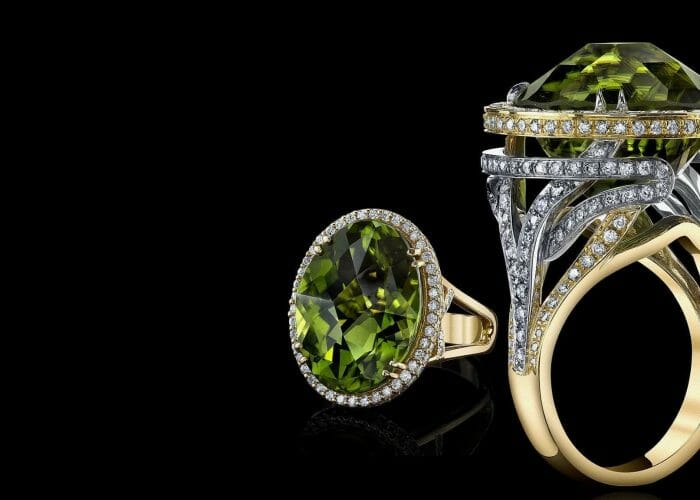 Peridot has always been associated with light. In fact, the Egyptians called it the “gem of the sun.” Some believed that it protected its owner from “terrors of the night,” especially when it was set in gold. Others strung the gems on donkey hair and tied them around their left arms to ward off evil spirits.

The word peridot comes from the Arabic “faridat,” which means “gem.” Most peridot formed deep inside the earth and was delivered to the surface by volcanoes. Some also came to earth in meteorites, but this extraterrestrial peridot is extremely rare, and not likely to be seen in a retail jewelry store.

Early records indicate that the ancient Egyptians mined a beautiful green gem on an island in the Red Sea called Topazios, now known as St. John’s Island or Zabargad. Legend has it that the island was infested with snakes, making mining unpleasant until an enterprising pharaoh drove them into the sea. From the earliest times, people confused this stone—now known to be peridot—with other gems. It was one of many labeled as “topaz.”

Some historians believe that Cleopatra’s famous emerald collection might actually have been peridot. People in medieval times continued to confuse peridot with emerald. For centuries, people believed the fabulous 200-ct. gems adorning the shrine of the Three Holy Kings in Germany’s Cologne Cathedral were emeralds. They are, in fact, peridots.

Gem miners find peridot as irregular nodules (rounded rocks with peridot crystals inside) in some lava flows in the United States, China, and Vietnam and, very rarely, as large crystals lining veins or pockets in certain types of solidified molten rock. Sources for the latter include Finland, Pakistan, Myanmar, and the island of Zabargad.

Geologists believe both types of deposits relate to the spreading of the sea floor that occurs when the earth’s crust splits, and rocks from its mantle are pushed up to the surface. Sometimes—as in Myanmar— these rocks can be altered, deformed, and incorporated into mountain ranges by later earth movements.

Rarely, peridot can have an extraterrestrial source, being contained in meteorites that have fallen to earth.

The color range for peridot is narrow, from a brown-green color to yellowish green to pure green. Yellowish green is the most common peridot color seen in jewelry.

Peridot is the gem variety of the mineral olivine. Its chemical composition includes iron and magnesium, and iron is the cause of its attractive yellowish green colors. The gem often occurs in volcanic rocks called basalts, which are rich in these two elements.

Spinel is a good candidate for the title of “History’s Most Underappreciated Gem.” Some ancient mines that supplied gems for royal courts from Rome to China produced spinel, but it was usually confused with better-known stones like ruby and sapphire.

In ancient times, the mines of central and southeast Asia yielded exceptionally large spinel crystals. These fine stones became known as Balas rubies, and some of them were the treasured property of kings and emperors, often passing through many hands as spoils of war. As a result, some of the world’s most illustrious “rubies” are actually spinel.

One of the most famous examples is the so-called “Black Prince’s ruby.” This historic crimson-red gem is set in England’s Imperial State Crown and displayed in the Tower of London. Smoothly polished and roughly octagonal in shape, it was probably mined in the mountains of Afghanistan. It first appeared in the historical records of fourteenth-century Spain, and was owned by a succession of Moorish and Spanish Kings before Edward, Prince of Wales—the “Black Prince”— received the stone in 1367 as payment for a battle victory.

Since then, many other English monarchs—including Henry VIII—have cherished the gem. It’s outlasted them all, surviving fires, attempted theft, and World War II bombing raids, to become—with the Koh-i-Noor diamond—one of the centerpieces of England’s Crown Jewels.

Another large spinel in the Crown Jewels, the “Timur ruby,” weighs over 350 carats. It, too, has a checkered history. Several Persian inscriptions carved into the gem testify to its age.

Modern technology hasn’t helped spinel’s confused identity as far as the general public is concerned. This is due largely to the widespread use of synthetic spinel as an imitation for many other gems. Most customers aren’t even aware that there’s a natural version of the stone.

Spinel, like garnet and diamond, is singly refractive, with the same physical properties in all crystal directions. It belongs to the cubic crystal system, and its characteristic crystal shape is an octahedron, which looks like two back-to-back pyramids. Well-formed spinel crystals are fairly common in nature.

Spinel can also form flattened crystals that look radically different from octahedral crystals. The flattened shape occurs when the pyramids that form an octahedron rotate against each other during growth. Scientists describe this as a “twinned crystal.” Large gems cut from good-color twinned crystals are typically shallow, and should be judged on their overall beauty rather than on proportions alone.

The spinel used in jewelry is a small part of a group of minerals that share the same crystal structure. Not all of them form transparent crystals suitable for jewelry use, however. Spinel offers a range of hues, from orange to intense “stoplight” red, vibrant pink, and all shades of purple, blue, and violet through bluish green.
Intense reds and pinks are caused by traces of chromium. The higher the chromium content, the stronger the red hue. Orange and purple stones owe their color to a mixture of iron and chromium.